This crash happened in Roswell, New Mexico on July 4th, 1947. This UFO crash is the one event that spawned nearly every UFO conspiracy theory today. An extra-terrestrial craft developed mechanical problems and crashed on a ranch located about sixty miles north of Roswell. Major, Jesse Marcel was ordered to go to the site and salvage the remains of the unknown aircraft reported by Mac Brazel who was a rancher that discovered the debris on his land. The pieces of the craft varied in length from 4-5 inches to 3-4 feet long. Some of the fragments had markings that resembled hieroglyphics (Egyptian writing). Although the material seemed to be unbreakable, the military investigators thought that it looked more like wood than metal. On July 8th, 1947, Walter Haut (the public affairs officer at Roswell Army Air Base) sent out a release announcing that the air force had "captured" a flying saucer. The announcement was then transmitted to thirty U.S. afternoon newspapers that same day, and the entire nation was electrified as word spread that a military team had actually recovered debris from the crash of one of those mysterious airborne discs. Numerous civilians who claimed to have arrived at the crash site remembered seeing the corpses of small, hairless beings with large heads, and round, oddly spaced eyes. Barney Barnett (a civil engineer employed by the federal government) said that he had seen alien bodies on the ground and inside the wrecked spaceship. Barnett also stated that a military unit arrived on the scene and an officer ordered him off if the site with a stern admonition that it was his patriotic duty to remain silent about what he had seen.

Fun Facts-
-The crash occurred approximately 75 miles north of Roswell.
-The object crashed on a ranch which was owned by the Fosters and managed by, William "Mac" Brazel.
-If you found any debris from the saucer, you would get rewarded $3000.
-Brazel actually found some debris, collected it, and took it into town.
-A press release, with the title, 'RAAF Captures Flying Saucer On Ranch In Roswell Region' was released from the army base.
-All of the debris collected was taken to, Ft. Worth, Texas for examination. Major-General Roger Ramey claimed the debris was actually from a weather balloon.
-Although some of those believe it was a crashed weather balloon, interest in the Roswell incident rises as eyewitness accounts increase the idea that it may have been a UFO that crashed there in 1947.
-Over the next several years, many books were written about the incident. Television shows about the crash were even beginning to be produced and aired. Theories and interests about the crash, increased tremendously.
-In the 1990s, the U.S. military tried to say that the crash was the result of a project named, MOGUL. It was a balloon that they had built, that crashed. Although the military said that, many people still not only believed that it was actually a UFO, but also, it was believed that alien bodies were found at the crash scene by the U.S. military.
-In 1995, a video was released, claiming to be actual footage of an alien autopsy, following the incident. It was aired over the entire world.
-Hundreds of thousands of people visit Roswell every single year in search of the truth about the incident. 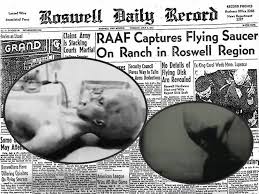 Thank You for Visiting!

Thank you for visiting my blog! Please let me know any suggestions you have! :)